Man, I have a headache; the spots look like marshmallows.

So I came home this evening, with my head throbbing, and discovered that my dog is a bit under the weather. I’m actually not sure what her problem is, but there seems to be a sensitive spot on her side that makes her yelp if pressed too hard (guess how I found that one out). She was fine when I went back to the office after my lunch break; she was happily eating food in her bowl. Now she’s mopey and sluggish. Maybe it’s just gas. She’s by her doggie door now and she allowed me to rub the areas that don’t hurt – a burp came out so now I’m praying that she just needs to fart.

DOGGIE UPDATE: I took my dog to the Vet this morning (Tuesday) and they ran some tests, the results of which will be in tomorrow. The Vet is about 98% sure it’s a gastrointestinal issue – I’ve got some medicine for her and special food to give her for about a week. As of now everything looks like she’ll be fine in a few days.

Anywhoo…..my point is that my head hurts and my baby is sick, so you may not get anything exciting from me tonight.

In the meantime, have you seen this woman? 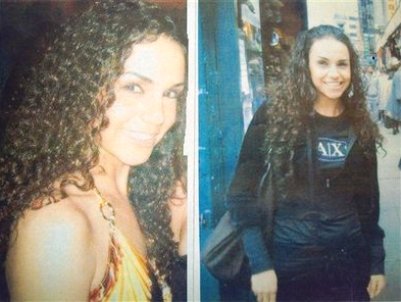 Laura Garza, 25, of Brooklyn left the nightclub Marquee around 4:00am last Wednesday with two men. According to police, sometime near sunrise she was seen about 70 miles north of Manhattan, in the Orange County community of Newburgh, in the company of 23-year-old Michael Mele.

Michael Mele, it turns out is a registered sex offender. Back in April he was convicted in Rockland County of forcible touching; he was sentenced to six year’s probation and was added to the state sex offender registry.

According to the police Laura Garza was seen on the club’s security cameras leaving willingly with Michael Mele and another man.

Mele turned himself in on Friday for a warrant accusing him of a local law violation in New York City and was soon transferred to the Rockland County Sheriff’s Dept. where he was reportedly booked on a probation violation charge.

Investigators are treating the case as a possible homicide, but they “certainly haven’t given up hope she is alive,” said state police Capt. Wayne Olson.

Originally from Mexico, Laura Garza moved from Texas to Brooklyn about six months ago and had a job at a shoe store in Manhattan at the time of her disappearance.

Some interesting background information on the case at Right Pundits HERE

Quick doggie update: She has moved from one side of the doggie door to the other and is now outside. She made no noise and she went through her little door, which I’m taking as a good sign. Fingers crossed she’s back to her normal self in no time.