Could it be? Is Michael Jackson close to death?

Various outlets are reporting that the King of Pop is suffering from an incurable lung disease. The disease the 50-year-old is said to have is called Alpha-1 Antitrypsin Deficiency.

“He’s had it for years, but it’s gotten worse, He needs a lung transplant but may be too weak to go through with it. He also has emphysema and chronic gastrointestinal bleeding, which his doctors have had a lot of trouble stopping. It’s the bleeding that is the most problematic part. It could kill him.”

Halperin also claims that Michael Jackson’s lung condition has left the singer so weak he can barely speak, and he’s going blind.

Michael Jackson’s people have released a statement that not only is Michael not in need of a lung transplant but he’s actually planning to go on tour.

“Mr. Jackson is in fine health, and finalizing negotiations with a major entertainment company and television network for both a world tour and a series of specials and appearances.”

I don’t know which way to go on this one. Maybe that face mask was more than just a fashion statement. If the rumors are true though, I hope there’s something Jackson can do to improve his health.

Wow, who would’ve thunk it – a life that started off with so much promise may end with so much sadness and misery. 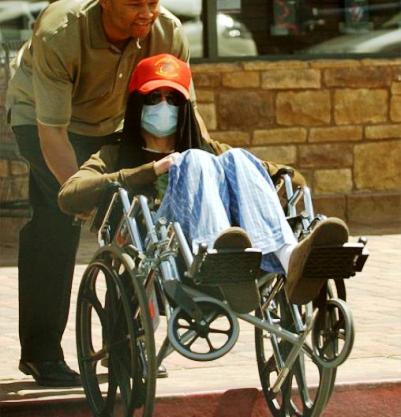