If at first you don’t succeed…..

Looks like Jennifer Garner and Ben Affleck’s trip to the hospital last week was a false alarm.

On December 31st the two were seen entering Cedars-Sinai Medical Center in the early afternoon. But then there was no news about them after that.

Today Jennifer Garner again entered the hospital through the parking garage with her husband Ben Affleck.

Reports are saying the 31st was just a routine appointment. But today could very well be the day.

It feels like Jennifer Garner has been pregnant forever. I bet she feels the same way. If Violet Affleck is any indication, this kid is going to be adorable. I’m hoping it’s a boy so we can see how they do making one of those. 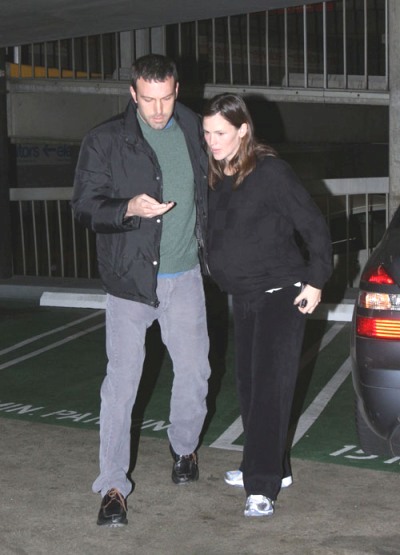 I wonder what Ben is texting, and to whom. The look on Jennifer’s face says a lot – like “Holy crap this hurts, I want this baby out of me. – so does the fact that she can’t seem to stand up straight.