Lindsay Lohan and Sam Ronson have broken up. Yes?

I guess it depends on who you ask. According to some, Lindsay Lohan packed her bags and left the house. Others, like Lindsay, say the two are still very much together.

As I said the other night, lesbian lovebirds Lindsay Lohan and Sam Ronson have been enjoying some rather nasty fights as of late; including a very public showdown on New Year’s Eve.

Today the word got around that Lindsay and Sam broke up. Apparently, that word got all the way back around to Lindsay, who decided to take to her MySpace blog to set the record straight (haha, straight, haha).

In a MySpace Celebrity Blog posting under “RUMORS,” the actress writes, “Little piece of TRUE information: We did NOT break up!”

Lohan, 22, tells media outlets reporting the split, “Get your stories straight please. It’s really annoying to have all of your friends emailing you saying, i saw, i read, etc… NOT TRUE.”

She signs the post with a happy face and “xoxox Lindsay.”

I’m not sure which way to go on this one. On the one hand, Lindsay looks like a pretty good lay and she does seem to have done Sam’s career well, but on the other hand, if I were Sam I’d be so beyond sick of the Lindsay Lohan drama and bull@@@@.

Whatever happens, it’s sure going to be fun to watch! 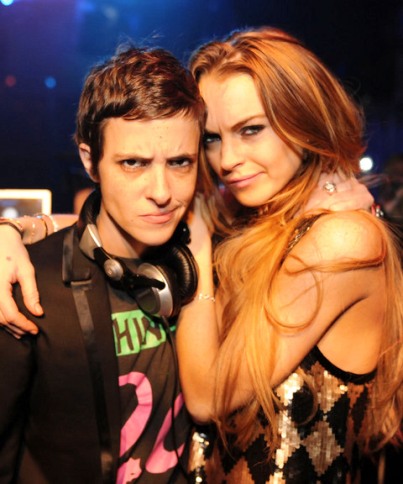