I suppose congratulations are in order for singer Fergie and actor Josh Duhamel who were joined in holy matrimony today in Malibu.

The couple dated for 4 years before getting married, which is like an eternity in Hollywood so this one might actually last longer than 2 years. Although a lot of people date for a long time then get married and immediately divorced, so I don’t know.

Stacy “Fergie” Ferguson walked down the aisle of a tented area near the ocean in front of 300 guests and wearing a Dolce & Gabbana gown, described as “a fitted, white ruched, corseted wedding gown with a mesh tulle overlay, spaghetti straps and a long train complimented by a veil draped in millions of dollars worth of one-of-a-kind diamonds by H. Stern.”

The couple’s wedding rings are also from H. Stern and are engraved with personal messages. The bride carried a bouquet of white flowers accented with crystals; the 10 bridesmaids were dressed in black.

When asked awhile back if she could foresee any changes once married, Fergie was quoted as saying, “We’re practically married, anyway. I’m madly in love with him. He understands how to treat a woman and give me respect.”

We’ll see what she says this time next year. Not that I’m saying anything bad will happen, I’m just saying sometimes marriage changes things. 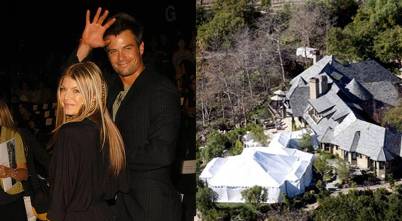