Lawyers for Britney Spears were in L.A. Superior Court on Friday, asking for a restraining order against Sam Lutfi and Adnan Ghalib, and accusing them of trying to gain control of Britney’s affairs. Jon Eardley, Lutfi’s lawyer back when the slime ball was fighting Jamie Spears over Britney’s conservatorship, was also named in the complaint.

According to reports, Britney Spears asked her conservators to “protect her from Sam and Adnan” because she is afraid of them.

According to the legal papers, late last month Lutfi sent text messages to Brit’s hairdresser, saying he wasn’t responsible for the conservatorship. A week or so later, Britney received “instant messages from a person with the screen name ____….The person — who posed as the mother of a daughter with autism — made a number of utterly false and hurtful assertions concerning Mr. Spears and his family, threatening to go public with such purported ‘information’ unless Mr. Spears spoke with that person.” Almost immediately after Brit got those messages, Lutfi began calling Jamie.

One of the lawyers in the case filed a declaration saying over the past month she received “multiple telephone calls and text messages from Lutfi.” She says Lutfi wanted to set up an urgent meeting to “speak with Mr. Spears and me with regard to what he claimed was ‘information he had received about Mr. Spears and his daughter, Britney Spears as well as others.'” The attorney also says Lutfi claimed “he had been talking with Adnan Ghalib about the conservatorship and Ms. Spears’ status as a conservatee.”

But it doesn’t stop there; TMZ has more of Lutfi, Ghalib Claimed They Had Britney Secrets.

Taking legal action against Adnan Ghalib and Sam Lutfi is an excellent decision. The men were leaches, living off Britney Spears, and exploiting her during the darkest and most vulnerable time of her life. Sam Lutfi crushed up pills and put them in her drink and Adnan used Britney for nothing more than his own publicity. Scum.

I think this is a great step in the right direction, and if Britney Spears really did ask for the protection herself, perhaps she’s finally seeing just how messed up she really was. 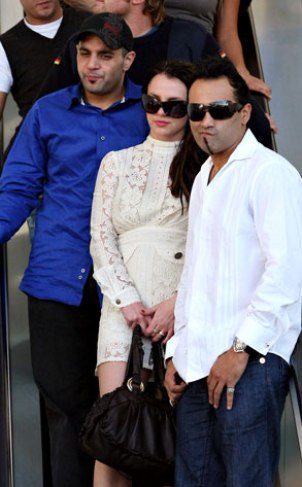