Freestyle motocross champion Jeremy Lusk died of head injuries Tuesday as a result of an earlier crash; he was 24. Lusk was riding in the X-Knights event in Costa Rica when he attempted to do a Seatgrab Indian Backflip and lost control of his bike.

After the crash Jeremy Lusk was taken to Calderon Hospital ICU in San Jose, Costa Rica where he was pronounced dead at 11:03pm. In the room with Jeremy when he died were his parents Chuck and Linda Lusk, his wife Lauren, and fellow Metal Mulisha riders Brian Deegan, Cameron Steele, Erik Apple, and Ryan Hagy. 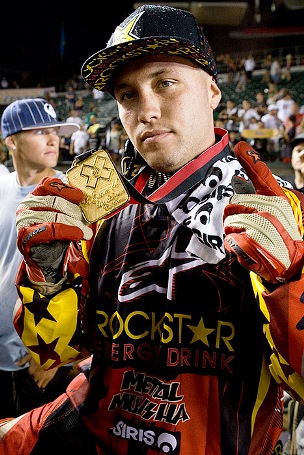 Jorge Ramirez the Chief of the ICU at Calderon Hospital said Jeremy Lusk suffered from spine and brain damage.

“He was in a medicine-induced coma as a protective measure, and the medicine was being reduced to see how his body responded,” he said. “That didn’t mean he was going to wake up. He was in shock and that got worse last night, until he stopped responding and entered into cardiac and respiratory failure.” [Source]

Jeremy Lusk had a successful 2008 and his future in motocross looked promising, until his tragic death.

In 2008 Jeremy Lusk won the gold at the X Game FMX event, and the silver for best trick at Moto X. Jeremy Lusk was also named rider of the year by FMX, and appeared on the cover of TransWorld Motocross magazine in January 2009.

Warning – The video could be perceived as graphic so watch it at your own risk (crash begins at the 2:40 mark)…