So it’s been a little over a week since Chris Brown allegedly beat the crap out of his girlfriend Rihanna. A few days ago Chris released a statement, which in my opinion, was a really lame apology – if you can even consider it an apology. To me it was just another Hollywood obligatory apology like the kind celebrities give when they’re arrested for DUI. I don’t know about you, but I consider beating a woman a little bigger of a deal than a DUI, and therefore it requires a much larger apology. Saying you’re seeking the counseling and support of your pastor and family just isn’t enough.

Some celebrities have chimed in on the situation – although I don’t really know why since none of them really have a strong opinion and seem to be more concerned with being politically correct…..

“This is a real situation. You have to have compassion for others. Just imagine it being your sister or mom and then think about how we should talk about that. I just think we should all support her. She’s going through a tough time. You have to realize she’s a young girl, as well. She’s very young.” – Jay-Z

“I think the world would be a better place if people worried more about what they needed to do to be better people, than … judging others on what kind of people they are. I don’t know what really went on with Rihanna and Chris, and I don’t think anyone else does, either. The only people who really, truly know are only the two of them, so I am not going to assume or comment. I’m going to mind my own business.” – Kelly Pickler

“I have no comment on that. That’s not my relationship. I have no reason to speak about it. I think they’re both great people.” – Lindsay Lohan

“It’s so sad. I don’t think anybody knows the whole truth, but I guess the truth really doesn’t matter when [abuse] is the result. That should never happen, no matter what. And I love his music. That being said, I think [about] Rihanna : No girl, no woman, no mother, no sister, no friend, no one deserves that. Absolutely.” – Molly Sims

“I know both of them well. They’re young, and all we can do is pray for them at this point.” – Nia Long

“I’m still praying for him. Everybody always has something negative to say about everything, and I always try to be positive. They’ve both made wonderful careers for themselves, and I think they will continue to do so for the rest of their lives.” – Ruben

“Women, throughout history, have been beaten and prostituted. Even today in movies and music, they’re portrayed as low-grade, so you know, he’s a youngster, and he can correct his ways. It’s just a tragedy – women and abuse.” – Mark Curry

But then there’s Roseanne, who thankfully has never been one to bite her tongue…..

…chris brown’s lies and excuses make me want to beat the crap out of him…he uses the language of the perpetrator just like every sleazy bastard who ever smacked his wife, kid, mother or girlfriend around uses. you dirty bastard, I hope you go to prison for ten years. IT’S YOUR FAULT, ASSHOLE! as for all the mealy mouthed hollywood and music scene chicks that can’t bring themselves to condemn a misogynistic bully, let me say this: your time as whores for propaganda is ending, @@@@@es. 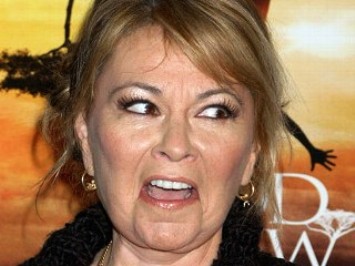