Televangelist Jimmy Swaggart looked into a camera and sobbed as he confessed his sins to his congregation.

But his downfall began about two years before that; he just didn’t know it. It’s a case of the pot calling the kettle black and karma then kicking the pot’s ass.

In 1986, Swaggart exposed fellow Assemblies of God minister Marvin Gorman, who had been accused of having an affair with another pastor’s wife, who was at the time undergoing counseling with Pastor Gorman…Once exposed, Gorman was defrocked from the Assemblies of God and his ministry all but ended.

The following year, Swaggart exposed fellow Assemblies Of God televangelist Jim Bakker’s sexual indiscretions and appeared on the Larry King Show, stating that Bakker was a “cancer in the body of Christ.”…

As a retaliatory move, Marvin Gorman hired a private detective to follow Swaggart. The detective found Swaggart in a Louisiana motel on Airline Highway with a prostitute, Debra Murphree, and took pictures of the tryst. Gorman presented Swaggart with the photos in a blackmail attempt to force Swaggart to come clean, but Swaggart refused. Gorman then presented the pictures to the presbytery leadership of the Assemblies of God, which decided that Swaggart should be suspended from broadcasting his television program for three months…

On February 21, 1988, without giving the details of his transgressions, Swaggart tearfully spoke to his family, congregation and audience, saying, “I have sinned against you, my Lord, and I would ask that your precious blood would wash and cleanse every stain until it is in the seas of God’s forgiveness.” On a New Orleans morning news show four days later, Murphree stated that while Swaggart was a regular customer, they had never engaged in sexual intercourse. 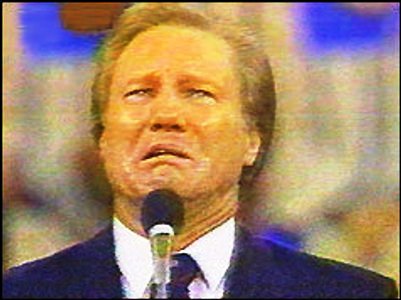