I don’t know if I’ve mentioned this already, but my boyfriend and I have decided to make Wednesday nights our “date night” so you’ll have to excuse me if my Wednesday posts come up a bit short.

Tonight we took advantage of a 2-for-1 coupon at TGI Friday’s then went and saw the new movie Fired Up.

Shawn Colfax (Nicholas D’Agosto) and Nick Brady (Eric Christian Olsen), the stars of the Gerald R. Ford High School football team, are dreading the prospect of another summer at football camp. When Nick hatches a scheme for the two to join their school’s cheerleaders at cheer camp instead, they find themselves awash in a sea of gorgeous young women. It all goes great until Shawn falls for Carly (Sarah Roemer), the beautiful head cheerleader who sees right through them. [Source]

I’m starting to think that one of the voices in my head is a 14-year-old boy because I find movies like Fired Up hilarious. Superbad: hilarious. College: hilarious. Pineapple Express: down right side-splitting.

Maybe it’s the juvenile humor, or the cheesy story lines. Or maybe I just laugh too easily (which, by the way, I don’t see as a bad thing). Whatever it is, Fired Up kept a smile on my face the whole 90 minutes.

If you think you’ve seen the two main characters – Shawn and Nick – somewhere before, it’s probably because you have. Nicholas D’Agosto has appeared in several TV shows including Heroes and The Office. Eric Christian Olsen has also appeared in various TV shows including Brothers & Sisters and 24, as well as movies like Dumb and Dumberer: When Harry Met Lloyd and Beerfest, in which he played Gunter. (Beerfest is another movie that makes me double over from laughter.) 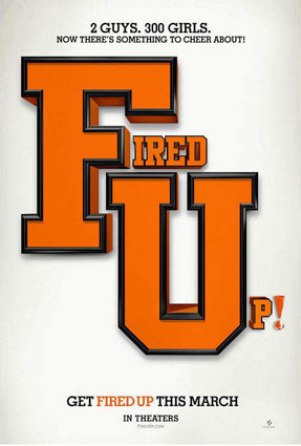