California’s attorney general Jerry Brown believes there are three people responsible for the drug fueled demise of the late Anna Nicole Smith, but he points the finger at one of them more than the other two.

“This was done knowingly and this was done with tragic consequences,” Brown told a news conference a day after felony charges were filed against Stern, 40, and two doctors, Sandeep Kapoor, 40, and Khristine Eroshevich, 61.

“This was a conspiracy between three individuals,” Brown said, adding that Stern was “the one that brought the drugs in many cases to Anna Nicole Smith.”

Brown went on to say that Anna’s tragic death, as well as the prosecution of the three men, should send a message to the public that doctors and pharmacists can be just as dangerous as your local street drug pusher.

“I’m very concerned about this indulgence by society,” says Brown. “People think those drug dealers on the street corner are the only threat. People in white smocks in pharmacies and with medical degrees are a growing threat, and that’s what this prosecution is all about.”

That was this morning. By this evening Howard K. Stern supporters were saying their piece.

Krista Barth was Howard K. Stern’s lawyer two years ago when he was fighting for Anna Nicole’s remains. She says that Howard K. is actually a victim in all this, and not the felon the public makes him out to be.

“The television, tabloid and Internet trial of Mr. Stern in the court of public opinion has been based on sensational lies, speculation, rumor and gossip,” Krista Barth claims in a statement to Entertainment Tonight. “Unfortunately, it appears that criminal charges have now been brought by the state of California based on this same type of misinformation.”

I don’t believe for one second that Howard K. stern is an innocent man. But that’s just me. Remember the clown video? I’m just sayin’. 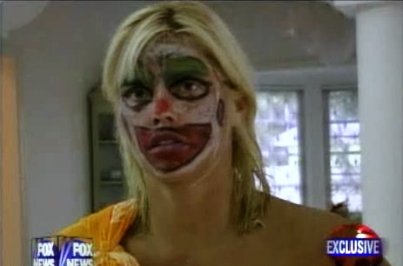 Oh yeah, there’s this picture too.