Of course Bruce’s ex-wife Demi Moore and her husband Ashton Kutcher were there, as was Madonna, which sort of took me by surprise.

There is a bit of an age difference between the two – much like Demi and Ashton. Bruce Willis is 54, and Emma Hemming is somewhere between 28 and 32; I have found places that say she’s 32, and others that say she was born in 1980, making her 28. The couple has been together for about a year.

So who is this Emma Hemming chick anyway?

Emma Hemming is a top fashion model who is best known for her association with the Victoria’s Secret line of sexy lingerie. She has also appeared on the HBO series Entourage, and had small parts in the films Perfume (2001), Perfect Stranger and The Comebacks (both 2007).

In the spring of 2005, Emma Hemming was selected as one of Maxim magazine’s most beautiful women in the world. She crashed onto the publication’s Hot 100 of 2005 list at No. 86, and appeared at Maxim’s Hot 100 party that was held in Hollywood in May of that year. Other celebrity guests attending the event included Dennis Rodman, Nicole Richie, Shannon Elizabeth, and Tara Reid. 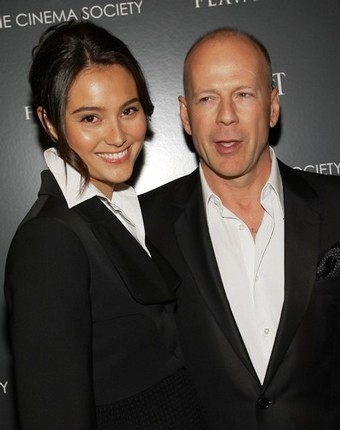