Are pigs flying and I just don’t know it?

David Letterman married is longtime girlfriend Regina Lasko last Thursday. Letterman made the announcement himself during Monday’s taping of the “Late Show.”

“Regina and I began dating in February of 1986, and I said, ‘Well, things are going pretty good, let’s just see what happens in about ten years…’” he continued.

“…I had avoided getting married pretty good for, like, 23 years, and I — honestly, whether this happened or not — I secretly felt that men who were married admired me…like I was the last of the real gunslingers, you know what I’m saying?’” he joked.

The family’s truck got stuck in the mud en route to the courthouse, he explained. Letterman “walked two miles back to the house in 50 mph wind,” he said. “It’s not Beverly Hills — it’s Montana.

“And the whole way, I’m thinking, ‘See, smart ass, see you try to get married and this is what happens,’” he went on.

After getting his car from home, five-year-old son Harry says, “‘Are we still going into town?’…he got very upset because mom had told him if I wasn’t back in an hour, the deal was off.” 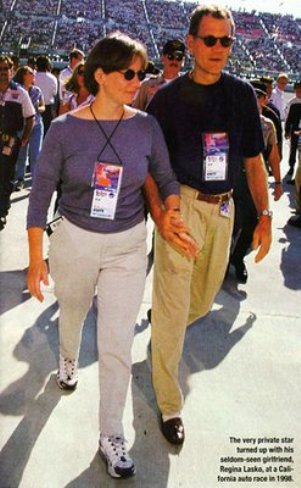