It’s been a few days since I’ve talked about Nadya Suleman and I was starting to miss her, and I didn’t want us to go into the weekend without knowing what’s going on with our favorite Octomom.

A couple of days ago someone threw a baby seat through the back window of Octomom’s minivan, smashing it into a trillion pieces.

La Habra, Calif., police said a report was filed…but as of right now, there are no suspects in the brutal vandalism of the OctoMobile.

Nadya’s lawyer says the object used to smash the window was a car seat that someone had removed from Suleman’s front porch, then heaved through the car.

You know, for someone who claims to not like being the spotlight, Nadya Suleman isn’t really doing much to avoid it.

This week she graces the cover of In Touch magazine, holding six of her eight newborns. Inside the magazine are 12 never-before-seen photos from inside Octomom’s house. All in an effort to convince us she’s a good and responsible mother, I’m sure.

But the publicity she attracts and claims to hate, doesn’t stop there. Nadya Suleman is in talks to star in her own reality TV show. Ahh, only in America can you have 14 children and force the tax payers to pay for everything, and then be offered a reality show.

According to an insider, a deal is in place for her to be filmed 24/7 for a reality TV show as soon as sons Jonah and Josiah are released from the hospital. “It’s about Nadya trying to raise 14 children while looking for love,” the insider explains. 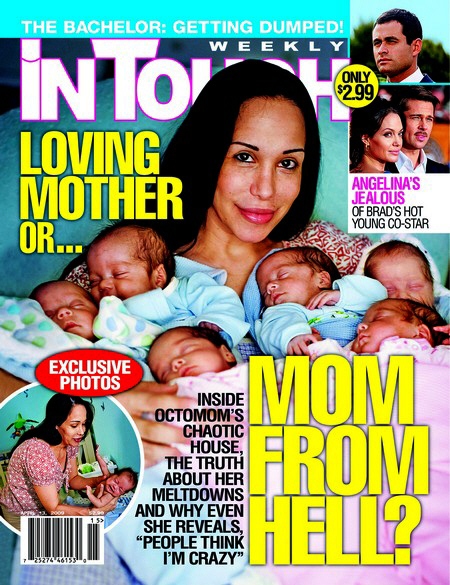