Home
Hollywood Gossip
Brooke Hogan Is Dating A Little Man. Or Is She Just Huge?

My lord she towers over him! He is literally in her shadow. 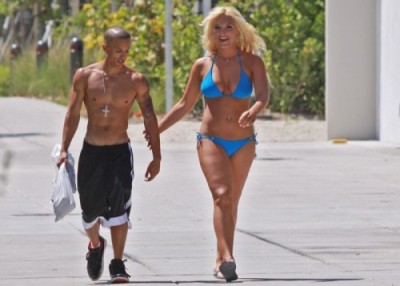 The pictures were taken while Brooke Hogan and her “rapper” boyfriend Yannique Barker, who goes by the name Stack$, were at the beach the other day where Brooke was filming her music video.

I didn’t realize she was still trying to beat that horse, but whatever.

Now, we’ve seen women taller than their men before – Rod Stewart and Penny Lancaster, Liv Tyler and Royston Langdon – but the women in those pairings are actually womanly and feminine. Brooke, on the other hand…..

Brooke looks like her father with boobs; although she is looking more and more like her mother. Of course, that’s not much better.

And don’t even try to tell me it’s just the angle of the pictures and that in real life the couple doesn’t look so stupid, ‘cause I ain’t buyin’ it. 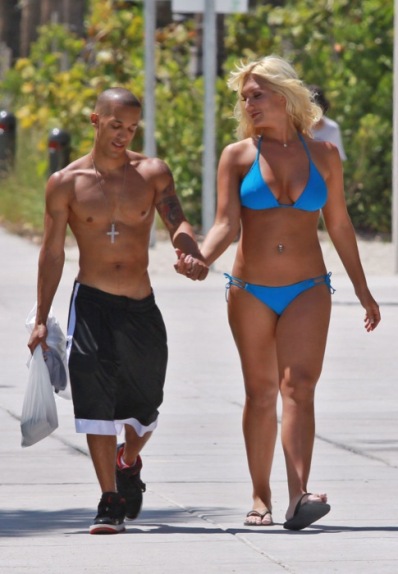 Visit Evil Beet Gossip for more pictures of the giant and her small stack.

Yannique Barker (born in January 20, 1985), better known by his stage name Stack$ (alternate form $tacks), is a rapper from Miami who grew up in Washington, D.C. Stack$ earned his name from a Miami rapper, Brisco, referring to his “ill” songwriting skills and multi-dimensional personality. His father managed Sly & the Family Stone, and Peaches & Herb, while co-producing “Midnight Train to Georgia” with his partner, Tony Camillo, before he founded a hugely successful aerospace company, and then later moved the family to Miami. [Source] 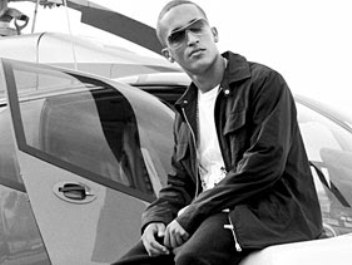