Sarah Jessica Parker, 44, and Matthew Broderick, 47, are expecting twin girls via a surrogate it was announced by their rep today.

“Sarah Jessica Parker and Matthew Broderick are happily anticipating the birth of their twin daughters later this summer with the generous help of a surrogate. The entire family is overjoyed.”

A friend of the couple says they have been trying for years to expand their brood but have been unsuccessful.

“They came to the conclusion that this was going to be the best alternative for expanding their family.” The couple turned to a surrogate — whose name and place of residence have not been disclosed — last year. “They’re over the moon and excited as any prospective parents would be,” says the friend. “Their life is about to get a lot busier.”

Sarah Jessica Parker and Matthew Broderick have been married since 1997 and have a 6 year-old son, birthed by Sarah Jessica, named James Wilkie.

Guess the divorce rumors that have been circulating the last few months were wrong.

Oooh, what if the surrogate is actually that chick Matthew Broderick was rumored to banging a while back.

I kid, I kid. But you never know – stranger things have happened. 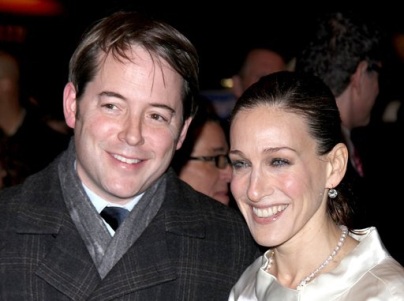