Singer, comedian, actor and impressionist extraordinaire Danny Gans died Friday morning at his home in Las Vegas. The exact cause of death is not yet known; he was 52.

Todd Ramussen, the spokesman for the Henderson Police Department said that police were called at 3:45am by a person who said Danny Gans was “having difficulty breathing.”

Danny Gans entertained Las Vegas for years and years at The Mirage, until last February when he moved his legendary show to the Encore Theater at Wynn Las Vegas. Danny Gans was named “Las Vegas Entertainer of the Year” for a whopping 11 years in a row.

Gans is survived by his wife Julie and their three children. 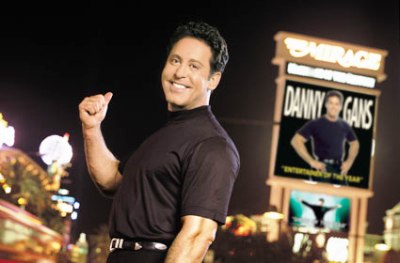 Las Vegas celebrities react to the death of Danny Gans…..

Cher: “I was shocked and saddened to hear of the sudden passing of such a unique and gifted talent.” [source]

Celine Dion: “I’m very, very sad, and completely shocked to hear the news about Danny…[My husband] Rene and I have loved him very much since the first time we saw him and met him at the Rio in 1997. Not only was he the best in his field, but he was such a kind and loving person. About a month before my last show at Caesars, Danny and his wife Julie, and their daughters came to see us. We talked and laughed for over an hour. I can’t believe he’s not with us anymore, and our heart goes out to his family. I wish them God’s strength.” [source]

Siegfried & Roy: “We are devastated at the tragic loss of the great entertainer and Las Vegas icon, Danny Gans…Having performed on the same property with Danny for many years, we were blessed to be touched by his generous spirit, kind heart and insurmountable talent…Our hearts go out to his family as we join the entertainment community in mourning the loss of our friend. The Las Vegas Strip is better for having had Danny Gans’ light shine so brightly, and it will be forever impacted by his loss.” [source]

Donny Osmond: “The unexpected passing of Danny Gans is such a shock to everyone here at Donny & Marie. He was not only our producer but also a good friend. I would call him for advice and direction regarding our show. We’ve lost an amazing entertainer. His friendship, charisma and talent will be greatly missed. My prayers go out to his wife, Julie and their 3 children. God bless you, Danny Gans.” [source]

Steve Wynn: “Elaine and I and all of us in the company are devastated at the loss of our brilliant, talented and loving friend. One of the most unique human beings and entertainers in the world has been taken from us in an unexpected moment…A profoundly tragic event that leaves us all sad and speechless. The loss of Danny to his wife Julie, his children Amy, Andrew and Emily, is at this moment impossible to comprehend. We will all try to go on with our lives without our dear friend. At this moment it seems almost impossible.” [source]