How do you celebrate a family who for 20 years has let you into their home and shared their lives with you through all its ups and downs?

You give them their own series of postage stamps, of course. 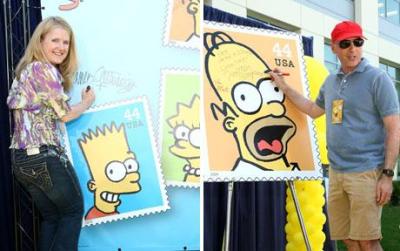 Last April it was announced that of the 50,000 stamp suggestions the U.S. Postal Service received from the public, the Simpsons were chosen to be the subject of a new stamp series.

James L. Brooks, the cartoon’s producer said, “We are emotionally moved by the Postal Service selecting us rather than making the lazy choice of someone who has benefited society.”

Each member of the Simpson family (minus Grandpa and Marge’s sisters) will be featured on their own first-class stamp.

Cast members who provide the voices for Homer, Marge, Bart, Lisa and Maggie attended the unveiling this past Thursday (May 7th) of the five Simpsons U.S. postage stamps at the 20th Century Fox lost in Los Angeles, CA.

The Simpsons postage stamps are just one part of a yearlong celebration Fox is calling, “Best. 20 Years. Ever.” which honors all things “Simpsons.”

Matt Groening, the cartoon’s creator said, “This is the biggest and most adhesive honor ‘The Simpsons’ has ever received.”

The Simpsons will celebrate their 20th anniversary on January 14, 2010. 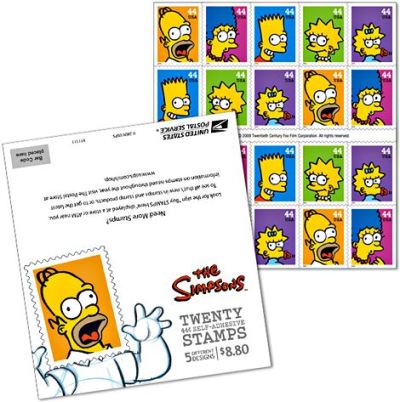