From Bitten and Bound:

The Milk star petitioned the Marin County Superior Court on Thursday to dismiss his current legal separation case. Penn’s rep has confirmed that the report is true and said that according to Sean, “It was an arrogant mistake.”

Rumors were flying in February, after the actor accepted his Best Actor Oscar for his role in Milk at the Academy Awards and failed to mention his wife. Two months later Penn filed for a legal separation.

The couple previously split in December 2007 and reconciled three days later. Penn and his wife have been married 13 years and have two children, Dylan, 18, and Hopper Jack, 15.

An interesting side note is the fact that Robin Wright Penn has been at the Cannes Film Festival for the past few days. Perhaps it is a case of ‘absence makes the heart grow fonder’.

Meanwhile, in another part of Cannes, The Inglourious Basterds ruled supreme. 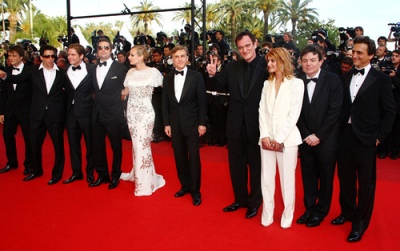