Ok, you know what?

I forget a lot of things a lot of the time, but I have never ever forgotten that I’m on my period. Never. I think it’s the whole bleeding thing that helps me remember to keep myself plugged up.

Britney Spears, on the other hand, seems to have a little trouble remembering when her Aunt Flo is in town.

Yes, a woman in her late twenties, with two children, can’t keep track of her own cycle. Of course, it is crazy Britney Spears so perhaps I shouldn’t be so surprised. Or so disgusted – the woman walks into gas station bathrooms barefoot for crying out loud!

According to reports, during a recent photo shoot with Elle magazine, Britney Spears once again ruined designer duds. Remember back in 2007 when she let her dog crap on a dress?

The pop tart took time off from her “Circus” tour to do an Elle magazine shoot, our spy says, and it was a disaster. “They dressed her in all these beautiful couture clothes — and, well, let’s just say she forgot what time of the month it was. It wasn’t pretty.” A rep for Spears didn’t return e-mails. But at least she didn’t let her dog poop on the clothes like she did at an OK! magazine shoot last year. [source]

So does this mean Jamie Spears now has to hire someone to do nothing but track the menstrual cycle of Britney Spears?

Why do I have a sick feeling there would be plenty of applicants for that position? Nasty. 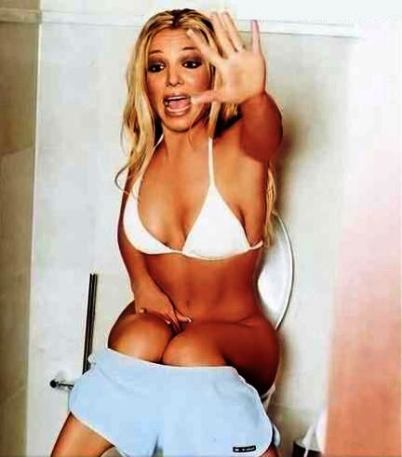