Home
Hollywood Gossip
Heidi And Spencer Pratt Are Back In The Jungle. Again.

After quitting like a thousand times and driving everyone nuts, it has been confirmed that Heidi and Spencer Pratt are back on “I’m A Celebrity…Get Me Out Of Here” tonight.

“Heidi and Spencer are still in the jungle and part of the show,” their rep told Us Wednesday morning. Us can also exclusively report that Spencer’s sister Stephanie and his friend Spenser (yes, there’s another one, only spelled with an ‘s’) were the people under the blankets at L.A.’s LAX airport Tuesday night. They were simply used as decoy to throw people off and give the illusion that Spencer and Heidi had returned to L.A., says a source.

Spencer and Heidi had already tried to quit the show at least twice — and then un-quit. They strongly suggested on Tuesday’s show, however, that they were leaving for good. “Super-celebrities don’t belong in the jungle. They belong in Hollywood with the paparazzi,” Spencer said. “We’re gonna miss you guys,” Heidi told the other contestants, who include Lou Diamond Phillips, Janice Dickinson and former Illinois first lady Patti Blagojevich. “But call us when you get back to L.A.”

So am I the only one who thinks this whole thing has been one big publicity stunt? I mean really, it just seems a little too choreographed.

If Heidi and Spencer quit again tonight, I think the other “I’m A Celebrity…” contestants should be allowed to shoot them with arrows. 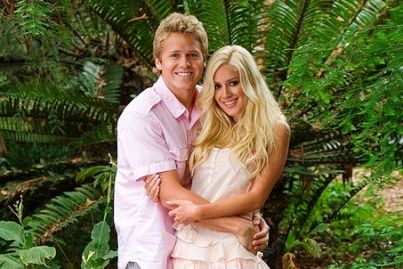