You know how they say good things come to those who wait?

Well, we waited, and now something good has come.

Apparently having had enough of her doesn’t-play-well-with-others attitude, Donald Trump set the wheels in motion today to strip Carrie Prejean of her crown and title of Miss California USA.

According to The Donald, Carrie Prejean was fired because – quite simply – she wasn’t doing the job she was hired to do, and she treated people badly.

Trump told TMZ Carrie refused to appear at around 30 events on behalf of Miss California USA. He says Prejean was contractually bound to appear and she just wouldn’t do it. He doesn’t think her attitude has anything to do with her politics.

Trump said: “To me she was the sweetest thing. Everyone else — she treated like s**t.”

The pageant organization was quick to point out that the firing of Carrie Prejean had nothing to do with her politics or morals; it had to do with the fact that she breached her contract.

Carrie Prejean, of course, is telling a different story and has even made claims of being pimped out to Playboy by the pageant organization. No, really.

Prejean claims pageant honcho Keith Lewis actually asked her last month if she would take two gigs — appearing on “I’m a Celebrity … Get Me Out of Here!” and Playboy. Prejean says Lewis told her Playboy offered $140,000 for her to pose semi-nude. She rejected both offers.

…[TMZ] talked to Lewis who said he was not pushing her to take either gig — but merely passing the offers along. Lewis said Prejean had insisted they not turn anything down without running it by her.

Once the throne is officially vacated, Miss Malibu Tami Farrell will take over as Miss California USA. 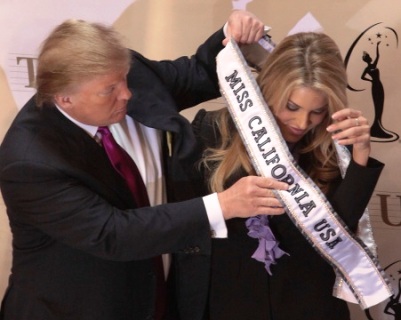