Not surprising: Usher and his wife Tameka Foster are getting divorced.

Surprising: Usher and Tameka have not lived together in a year.

I’m rarely taken aback by a Hollywood divorce, but learning that the R&B star and his soon to be ex-wife have been living separately for a year caught me a bit off guard.

About 200 people attended Usher and Tameka’s wedding in August 2007 just outside of Atlanta, Georgia, at a 3,500 acre resort built in the style of a 16th-century-style French chateau.

Usher told Usmagainze at the time, “It was beautiful and private…We didn’t have a first dance – but we had a lovely, intimate dinner filled with candlelight and flowers.”

A year later, the blushing bride and groom stopped living together and began to lead separate lives.

Calling the marriage “irretrievably broken,” Usher Raymond, 30, has filed for divorce from Tameka Foster, 38. In the divorce petition filed with the Fulton County Superior Court last Friday, Usher says the couple separated in July 2008 and that there is “no reasonable hope of reconciliation.”

Tameka Raymond has 30 days to respond to the petition, and does plan on contesting the divorce. Through her attorney, Tameka stated that she has been a “faithful wife and loving mother.”

Hmmm…….sounds a little like Mrs. Raymond may have been stepping out on Mr. Raymond. 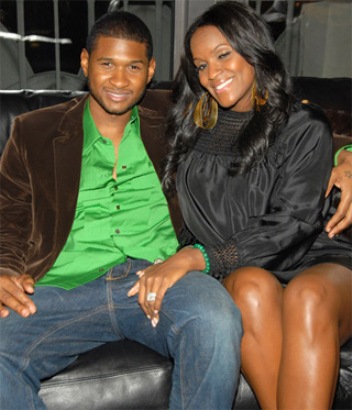