On this day in 1988, actor Michael J. Fox and actress Tracy Pollan exchanged vows under a tent in a very private ceremony at the West Mountain Inn wooded hillside in Arlington, Vermont.

In his autobiography Lucky Me: A Memoir, Michael J. Fox says about the wedding:

“… it was a great wedding, a tremendous success … we paid for our privacy in the coin of bad press … It was a price well worth paying because it enabled us in a single moment not only to join together in the ritual of marriage, but to draw a line and create a space apart for ourselves. A place of our very own that, unbeknownst to us then, would help us to weather a much more serious storm ahead.”

Michael J. Fox and Tracy Pollan first met on the set of Family Ties during the 1985-1986 season, but nothing romantic happened between them as they were each in a relationship.

Two years later Michael and Tracy worked together making the movie Bright Lights, Big City, and finding that each other was single, quickly began dating; they became engaged in 1987.

Michael J. Fox and Tracy Pollan have now been married for 21 years, and have four children. 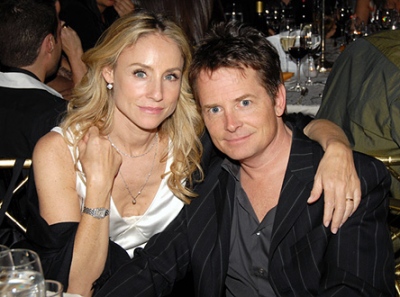