Another day, another divorce rumor in the world of politics.

The Immoral Minority Blog, a site dedicated to “finding the truth, exposing the lies, and holding our politicians and leaders accountable when they fall far short of the promises that they have made to both my fellow Alaskans and the American people” is reporting that sources close to the family say Sarah Palin and her husband Todd Palin are headed for splitsville.

According to the Immoral Minority, Sarah Palin has been seen numerous times lately without her wedding ring, and she might have thrown the ring into a lake in a fit of rage (there has been talk of cheating on both sides). The site also says that Palin’s recent weight loss, hair loss, and overall quietness can be attributed to the stress of her marriage falling apart.

At this point it’s all hearsay, but the Alaska Report – the site that broke the “Iceberg Scandal” story that Sarah Palin would be stepping down as governor weeks before the official announcement – has picked up this divorce story, so there could be more truth to it then Palin’s camp wants us to believe.

The source spilling the beans also says an announcement of separation will not be made for a while due to the financial mess it would create, but that Todd Palin is already sleeping on the couch. They go on to say that Sarah Palin has bought some land in Montana and that the former Governor and Vice Presidential candidate wants to move her and kids there, but Todd doesn’t want to leave Alaska.

But, the source didn’t stop there! Also revealed was an incident that occurred before Palin was a candidate for vice president in which Todd Palin pulled a gun on Levi over some disagreement over his relationship with Bristol. Apparently that story will be printed in an Alaska publication soon.

More “explosive” Palin news will be revealed in the October issue of Vanity Fair, in which Levi Johnson reveals “heretofore unknown information.” The person that usually is there to make sure Levi doesn’t say too much (Tank Jones) wasn’t there for his VF interview, which might be part of the reason. 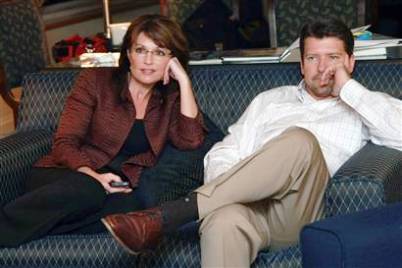