I totally missed this one; guess I was too caught up in the Carrie Prejean sex tape brouhaha, but apparently Miss Prejean was not the only beauty queen stripped of her crown this year.

Miss England 2009, Rachel Christie, relinquished her crown earlier this month after she was arrested for assault.

According to reports, 21-year-old Rachel Christie – who happens to be the first ever black Miss England – got into a fistfight with Miss Manchester, Beverly Jones. The fight happened during a porn-themed costume party at the Mansion Club in Manchester, and was allegedly over Rachel’s boyfriend David McIntosh, a member of England’s version of Gladiators.

Published accounts of the sexy slugfest at a Manchester nightclub said Jones was clubbed in the face “several times” after she and Christie tangled over Tornado, a Royal Marine commando whose real name is David McIntosh.

The beefy star of the “American Gladiators”-like show, who lists his inspiration on the show’s Web site as vengeful Vietnam vet John Rambo, had moved on to Christie after a prior romance with Jones.

The bad royal blood boiled over when Jones (5-foot-5 with a 34B bust) apparently flashed Christie (5-foot-10, 34B) a racy text message Tornado sent her.

Dressed as an angel, the hell-raising Christie was accused of knocking around Jones, who was outfitted as a cavegirl.

That’s hot. Where’s the video? I know it’s out there somewhere. 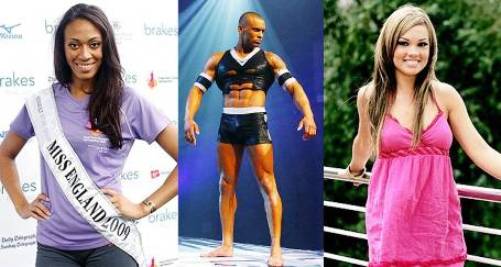