Amanda Knox, the American woman accused of killing her roommate Meredith Kercher in 2007 while they were both exchange students in Italy, has been convicted by a jury and is now facing 26 years in an Italian prison. In a separate trial, Knox’s now ex-boyfriend Raffaele Sollecito was sentenced to 25 years for his part in the brutal killing.

The two were convicted of all charges, except theft. They must pay 5 million euros to the victim’s family. Knox must also pay 40,000 euros to a man who she falsely accused of the killing.

When the judge read the jury’s verdict, Knox started to weep and said “No, no.”

In a written statement, Knox’s parents said they were “extremely disappointed” in the verdict.

“While we always knew this was a possibility, we find it difficult to accept this verdict when we know that she is innocent, and that the prosecution has failed to explain why there is no evidence of Amanda in the room where Meredith was so horribly and tragically murdered,” they said.

“It appears clear to us that the attacks on Amanda’s character in much of the media and by the prosecution had a significant impact on the judges and jurors and apparently overshadowed the lack of evidence in the prosecution’s case against her.”

Prosecutors said Kercher died during a sex game in which Knox taunted her while Sollecito and an acquaintance Rudy Guede sexually assaulted her. Guede was convicted in a separate trial and is appealing.

Now that Amanda Knox has been found guilty, we all know what’s next…..MOVIE! 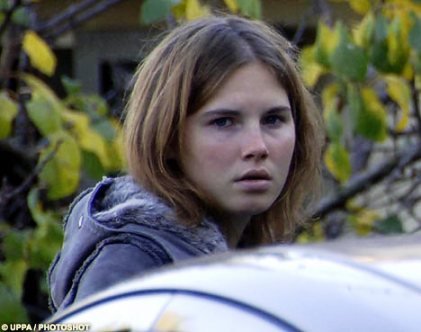