It’s been a while since Hollywood gossip has genuinely made me sad – which I suppose is a depressing commentary on me and my view of the world, but whatever.

Anyway, when I heard today that Susan Sarandon and Tim Robbins have decided to go their separate ways after 23 years of unwedded bliss, I was actually sad. Like frown in my heart, sad.

My boyfriend and I have been together for a little over five years and are often on the receiving end of the age old “when are you getting married” inquisition; I’ve always used Hollywood couples like Susan Sarandon and Tim Robbins, as well as Goldie Hawn and Kurt Russell, as examples of long happy relationships that are not bound by marriage.

Now what am I gonna do?

“Actress Susan Sarandon and her partner of 23 years, actor Tim Robbins have announced that they separated over the summer,” her rep Teal Cannaday tells People in a statement. “No further comments will be made.”

Although they never married, they had two sons together, Jack, 20, and Miles, 17.

“I won’t marry because I am too afraid of taking him for granted or him taking me for granted – maybe it will be a good excuse for a party when I am 80,” Sarandon has said in the past.

Sometimes I really wish celebrities would take my feelings into account when they make life changing decisions. I mean really! How rude. 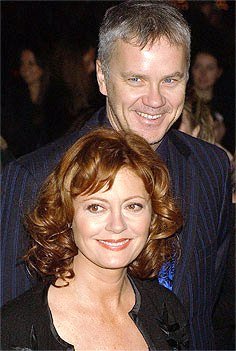