Well DUH!!! That’s like admitting his hair is red.

But I suppose we have to give Mark McGwire credit for at least finally coming clean about his steroid use (paging Barry Bonds!).

Think of all the controversy that could have been avoided if Mark McGwire admitted to his steroid use back in 2005 when called to testify in front of congress; at the time the slugger refused to answers any questions.

I guess he’s changed his tune now. Of course, his new position as a hitting instructor for the St. Louis Cardinals may have something to do with the timing of his long overdue admission.

Below is Marc McGwire’s full statement, as released to the Associated Press on Monday January 11, 2010:

“Now that I have become the hitting coach for the St. Louis Cardinals, I have the chance to do something that I wish I was able to do five years ago.

I never knew when, but I always knew this day would come. It’s time for me to talk about the past and to confirm what people have suspected. I used steroids during my playing career and I apologize. I remember trying steroids very briefly in the 1989/1990 off season and then after I was injured in 1993, I used steroids again. I used them on occasion throughout the ’90s, including during the 1998 season.

During the mid-’90s, I went on the DL seven times and missed 228 games over five years. I experienced a lot of injuries, including a ribcage strain, a torn left heel muscle, a stress fracture of the left heel, and a torn right heel muscle. It was definitely a miserable bunch of years and I told myself that steroids could help me recover faster. I thought they would help me heal and prevent injuries, too.

Baseball is really different now — it’s been cleaned up. The commissioner and the players’ association implemented testing and they cracked down, and I’m glad they did.

I’m grateful to the Cardinals for bringing me back to baseball. I want to say thank you to Cardinals owner Mr. DeWitt, to my GM, John Mozeliak, and to my manager, Tony La Russa. I can’t wait to put the uniform on again and to be back on the field in front of the great fans in Saint Louis. I’ve always appreciated their support and I intend to earn it again, this time as hitting coach. I’m going to pour myself into this job and do everything I can to help the Cardinals hitters become the best players for years to come.

After all this time, I want to come clean. I was not in a position to do that five years ago in my congressional testimony, but now I feel an obligation to discuss this and to answer questions about it. I’ll do that, and then I just want to help my team.”

Well I guess it’s never too late to right a wrong, but for crying out loud – it’s not like we didn’t know Mark McGwire was a roid-head. 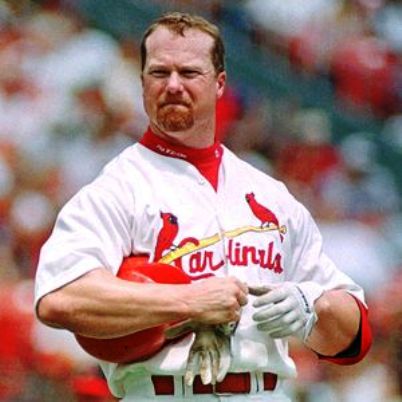