Oh wait, that was just gas.

So apparently Kristina and Karissa Shannon, 20, are moving out of the Playboy mansion and into the Playmate house.

Hugh Hefner says it’s because the girls want to travel more and do promotion for Playboy.

Hef tells E! News that his relationship with his main squeeze, Crystal Harris has been getting “more serious” and that the twins have expressed interest in doing more Playmate promotional work for the company.

“They’ve been hanging out with a lot of the other Playmates and they see these girls traveling across the country to do promotion,” he says. “They would like to be doing that, too.”

“They thought it was a good idea,” he said after he suggested the move to them. “They will now be friends, but they won’t be defined as the girlfriends.” 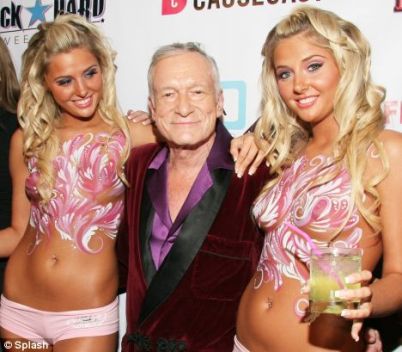 Who is Crystal Harris, anyway?

Crystal Harris (born April 29, 1986 in Lake Havasu City, Arizona) is a British-American model and singer who was the Playboy Playmate of the Month for December 2009. She has also appeared as “Co-Ed of the week”, the week of October 30, 2008, on Playboy.com under the name Crystal Carter.

She is currently dating Hugh Hefner. Harris also appears in E!’s The Girls Next Door starting in late 2009.