Wanna see what 10 plastic surgery procedures your family doesn’t even know you’re having looks like? 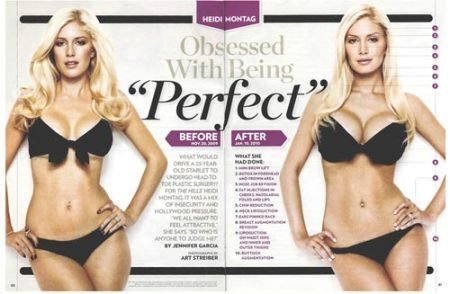 Ugh, I cannot believe I have written about Heidi Montag and her stupid new boobs three times in the past two days.

I think instead of talking about Heidi again and run the risk of brain implosion, I’ll just share with you some celebrity reactions to Heidi’s new look.

Emmy Rossum, who at age 23 is the same age as Heidi Montag, had this to say via Twitter today:

“It upsets me to see young women in the spotlight advocating plastic surgery ,” Emmy writes, adding, “ANY surgery is extremely dangerous & should not be taken lightly — much less, used as a tool to increase notoriety or popularity.”

She continues, “By putting this on magazine covers, we are somehow legitimizing the dangerous lengths to which some will go for fame and ‘beauty.’”

…Rossum concludes, “There are so many REAL ISSUES in this world that NEED attention. Let’s try to take a moment to be grateful we are ALIVE.”

Heidi Montag’s costar on The Hills Audrina Patridge had a diplomatic response; most likely because her pants are on fire when she says she’s never had any work done (uh…..booooobs?).

“I haven’t seen how she looks, so it’s hard for me to comment on it, but these are her decisions, and as long as Heidi is happy, that’s all that matters,” says Patridge, who has denied reports she’s also undergone cosmetic surgery.

But even as the 24-year-old reality star shows her support, Patridge admits surprise at the number of procedures her friend underwent.

“I think it’s a case of, ‘To each their own,’” she told PEOPLE on Thursday while at Kari Feinstein’s Style Lounge at Zune in West Hollywood, “but 10 procedures in one day is a little much.”