I’m back! And just in time too!

Another actor from the 1980s has died.

This time, it’s former teen heartthrob Corey Haim; he was 38. Long plagued by drug addition, Haim’s death does not come as a total shock, but it’s sad just the same.

“There were no illicit drugs found at the residence. There were four prescription bottles taken,” Los Angeles Coroner assistant chief Ed Winter confirmed to UsMagazine.com.

According to Ed Winter, Corey Haim awoke early Wednesday morning and told his mother he was not feeling well.

“His mother was with him. He got up. He felt weak, and she helped him on to the bed. She called paramedics…They responded and transported him to the hospital. He was pronounced [dead] at 2:15 a.m.”

Winter also said Haim’s body was “not in bad shape” and that the actor had “been sick for the last couple of days with flu-like symptoms” and was taking over-the-counter medications.

Weird, the same thing was said about Brittany Murphy after she died. Are the gods trying to tell us something? Like, if you’re suffering from flu-like symptoms, stay off your pain killers. Obviously I’m no expert, but there does seem to be a freaky correlation here.

My thoughts go out to Corey Haim’s loved ones. Even though the death of an addict isn’t always surprising, it’s devastating to the family nonetheless. 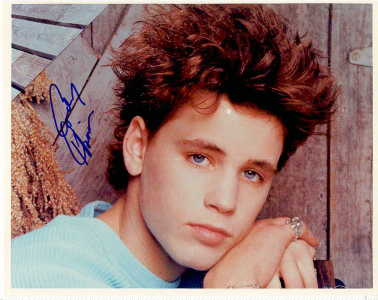