Say it isn’t so!! I refuse to believe this one. Flat out refuse.

There’s a rumor going around – started by the alleged other woman, of course – that Jesse James cheated on Sandra Bullock while she was away filming The Blind Side.

She’s some tattoo model bimbo named Michelle “Bombshell” McGee, who told In Touch Weekly magazine that she didn’t know Jesse James was married, and if she had, she never would have hit that.

Unless you’ve been living under a rock for the past few years, you know dang well that he’s married to Sandra Bullock.

From the interview she gave In Touch Weekly, it’s clear this “Bombshell” chick feels bad about her tryst with another woman’s husband. And by “feels bad” I mean she feels nothing at all.

When Sandra Bullock thanked her bad-boy husband, Jesse James, as she accepted her best actress Oscar for The Blind Side, she may not have known that while she was away shooting the film, Jesse was carrying on a steamy affair with a tattoo model. While Jesse has had an 11-month affair, including five weeks of sex, with Michelle “Bombshell” McGee, she believed he and Sandra were no longer together. “I would never have hooked up with him if I thought he was a married man,” Michelle tells In Touch in an exclusive interview. [source]

Now word is coming out that Sandra Bullock has pulled out of the London premiere of The Blind Side, due to “personal reasons.”

“Due to unforeseen personal reasons a trip abroad to support The Blindside has been deemed impossible at this time,” says a statement released by Warner Bros. “I apologize for any inconvenience this may have caused and thank you for your continued support of the film.” [source]

I don’t like the sound of that. Maybe she’s pulling out of the premiere so her “scandal” doesn’t take the spotlight away from the movie. I mean, she is a professional and knows something like this would totally overshadow everything else on the London red carpet.

Poor Sandra – I really hope this rumor is just a rumor. 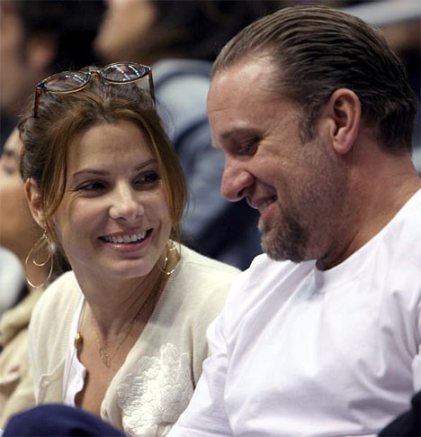