Home
Hollywood Gossip
Sandra Bullock Moved Out Days Ago. Say It Isn’t So!

It’s all just too overwhelming for me right now. I’m not even sure I can talk about it.

My head hurts. My stomach is churning.

Word just hit the airways that Sandra Bullock has moved out of the home she shares with husband Jesse James. And apparently she did it a few days ago – before the Jesse James cheating story came out.

Sandra Bullock and Jesse James are not living under the same roof right now.

The actress left the Southern California house she shares with James just days before a report of infidelity by her husband, a source tells PEOPLE.

Bullock, 45, left on Monday, the source says. Bullock, who won her first Oscar – a Best Actress award – for The Blind Side on March 7, also abruptly canceled a trip to Europe for the London premiere of the film.

I’m still keeping my fingers crossed that this is all BS and everything is hunky-dory in Bullock land, but it is starting to look pretty bad.

I swear, I’m going to be so ticked off if Jesse James announces he’s going to rehab for sex addiction. Just because you let your wiener wonder, that doesn’t mean you’re a sex addict. Just sayin’.

Are you happy now Jesse James? You’re little “pray for us sinners” head-tattooed whore better have been worth it; you may very well have just ruined your marriage.

Have you seen this Michelle Bombshell McGee chick? She’s got a friggin’ tattoo on her friggin’ forehead! 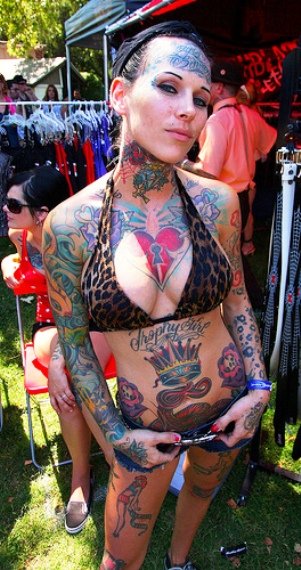