She also fought on the front lines in Iraq.

Lovingly referred to as “Combat Barbie” by her Army buddies, Katrina Hodge was awarded a commendation for disarming and detaining a suspected rebel fighter with her bare hands.

And now she’s got a tight grip on the Miss England Pageant Organization – convincing officials that the swimsuit part of the competition should be trashed, and the girls should instead compete in a sports challenge. Lance Corporal Hodge, by the way, will be overseeing this year’s pageant.

It’s actually an awesome idea, and it’s coming from a hot woman who used to model lingerie!

[Hodge] joined the Army after leaving school at age 16 and was one of only ten women in the Royal Anglians to be posted to Iraq for seven months at the age of 18.

As a spokesmodel for lingerie company La Senza, the gorgeous brunette is no stranger to posing scantily clad but said she did not think the swimsuit round was fair to contestants.

“I think it’s nerve-racking enough for girls to get up on a stage and speak, let alone appear in a swimsuit,” she said.

“It’s good the girls are being given a sports challenge in this year’s competition.” 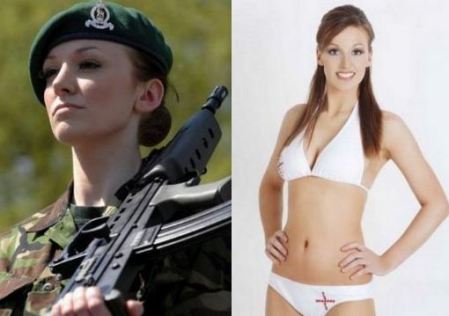 A teen beauty queen who was featured on ABC’s ‘Wife Swap’ two years ago is suing the network for $100 million, charging they framed scenes to “maximize her public embarrassment” by making her look like a spoiled brat. In court papers obtained by the NY Daily News, Alicia Guastaferro, 18, claims she has received death threats and harbors suicidal tendencies since the show, in which she offered, “I do feel sorry for people that are not gorgeous people.”…

The episode focused heavily on Guastaferro, who is described as the “princess of pageantry” and is given presents every day by her parents, who keep a Christmas tree up all year…

Read the rest of the story at PopEater.com – it gets much juicier!