Hayden Panetierre is small and her new boyfriend is big. A big Russian named Wladimir Klitschko, to be exact. And according to Hayden, their relationship is “an exciting experience.”

The 20-year-old actress and 33-year-old boxer have been an item since December ’09, but up until now have been pretty mum on the subject.

“I’ve never had an athlete as a boyfriend before, and it’s an exciting experience. I think it’s awesome that he’s so athletic, but I’m most fascinated with his intelligence. He’s unbelievably clever…

“Even though I’m small, I can dish it out too. But I have to admit, I feel really protected with such a strong man by my side. Now, whenever someone’s bugging me, I say: ‘Look out, my boyfriend is a boxer!’”

Oooh, image what the sex is like! I bet she gets tossed all over the place. 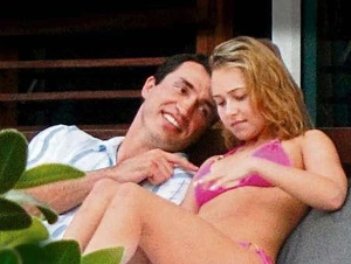 He was born in Semipalatinsk, Kazakh SSR (now Kazakhstan). Though a major celebrity in his former adopted home of Germany, he moved with his older brother Vitali to Beverly Hills in 2004. Their father, Vladimir Rodionovich, was a Soviet Air Force Colonel. Their mother is Nadezhda Ulyanovna.