I would like to preface this by saying I have not watched Grey’s Anatomy since the middle of the second season, so story lines I have no idea about.

I do, however, know about the ruckus Katherine Heigl, who plays Dr. Izzie Stevens, has caused behind the scenes for the past couple of years. I also know I’ve never really liked Katherine Heigl; but that’s beside the point.

The folks over at Grey’s Anatomy won’t have to worry about Katherine Heigl anymore – although I have a feeling we’ll still be hearing from the whiny actress.

In an interview with Entertainment Weekly, Heigl says she’s “done” with Grey’s Anatomy, and sites her growing family as the reason why.

“We just finalized our agreement. Everyone had been working really hard to find an amicable and gracious way of letting go and moving on. It’s sad but it’s what I wanted.”
The new mom says she’s leaving the show for family reasons, disclosing to the publication, “I started a family and it changed everything for me. … It changed my desire to work full-time.”

[Grey’s Anatomy] creator Shonda Rhimes granted Heigl her request to be let out of her 18-month contract early. Her character Izzie was scheduled to appear in the remaining five episodes of the season, but that is no longer the case. “I know I’m disappointing the fans,” Heigl tells EW. “I just had to make a choice. I hope I made the right one.” 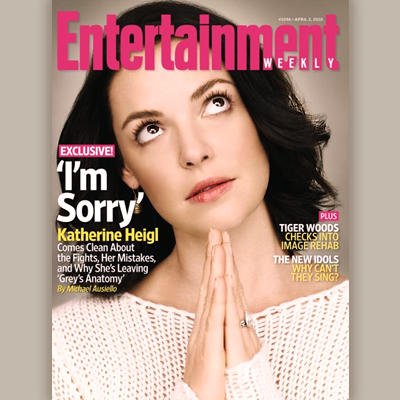