Uh-oh … you know all those rumors about Paris Hilton being engaged to Doug Reinhardt?

The couple recently spent a week with Reinhardt’s mother Kelly and stepfather Duane Roberts on the Caribbean island of Anguilla. Witnesses said Paris and Doug looked like they were on a honeymoon.

“… They would be on beach for hours, just staring into each other’s eyes, kissing and laughing. At dinner Doug’s mom was overheard referring to Paris as her, ‘daughter-in-law’ and it’s pretty clear that Paris’ family feels the same way about Doug.”

Well that’s good, I guess. Maybe they really are perfect for each other, who knows. I do know that Paris Hilton seems to have been out of the news more than ever since she and Doug began dating – with the exception of the scuffles thrown in here and there.

The idea of marriage is obviously not out of the question for Paris Hilton, 29, who said she can see herself marrying Doug Reinhardt, 24, this year.

She said: “I wouldn’t rule out a wedding in 2010. With how amazing everything is going between us, I see a very bright and happy future.”

After a night out in February with Doug and her parents, Paris tweeted about how pleased she was at how well they got on.

She wrote: “What a fun night! My mom and Doug were so cute dancing together! I love how my parents love my love! We all had a blast! Great night! (sic).” 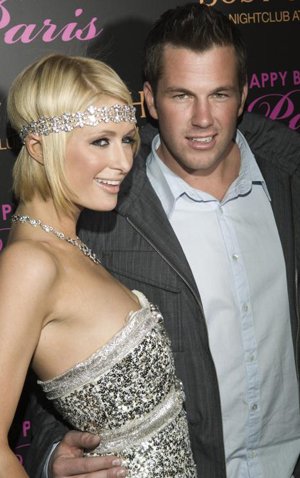