The producers over at ABC’s Wife Swap but really be hard up for ratings.

In their promo for the coming season premier, which airs Friday April 2nd at 8:00pm they say it’s going to be “the strangest season premier ever.”

How could any family be stranger than Balloon Boy’s you ask? Well, it’s possible. And frighteningly so.

The first episode kicks off with a woman who’s the “mother” of fourteen plastic babies that she makes herself. She vamps for the camera when she grabs her belly and exclaims “There’s two more on the way!” Wife Swap has been unwavering in their choice to swap families with underage children, so much that it’s almost more of a “mom swap” than a wife swap, but there’s no indication from the promo that this woman has any real-life children of her own.

And that’s just the premiere!

The next season of Wife Swap will also feature a couple that dresses like superheroes to “fight boring relationships” and a family that’s preparing for the threatened 2012 end of the world. 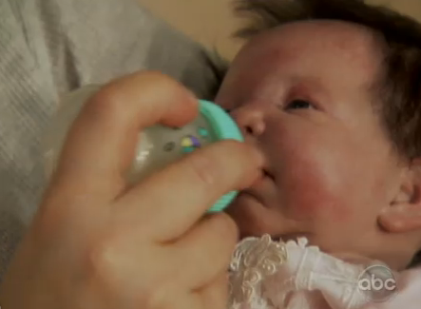 What is ABC’s Wife Swap?

Each week from across the country, two families with very different values are chosen to take part in a two-week long challenge. The wives from these two families exchange husbands, children and lives (but not bedrooms) to discover just what it’s like to live another woman’s life. It’s a mind-blowing experiment that often ends up changing their lives forever.

In the first week of the swap, the wives move in with their new family and adopt their very different lifestyle. They agree to follow a manual written by the departing wife that sets out the rules of their new household — how they parent, shop, do the house work, manage their budgets and their social life. But then, in the second week, everything changes. The new wives take charge. They introduce their own set of rules and get to run the new household their way. It’s a radical shock to both families. The results are explosive, enlightening and often very funny. This is a show about the things that really matter to families across America.

At the end of the show, the two couples meet for the first time. In a highly-charged exchange of views, both couples make a frank assessment of each other and talk about what they’ve learned from the experience.