Don’t know about you, but it doesn’t surprise me one bit to hear that Kate Gosselin is always late for hair and makeup and is basically acting like a diva on the set of Dancing with the Stars.

Sources close to the show say that even though one would expect known prima donnas like Pamela Anderson and Shannen Doherty to act out behind the scenes, it’s actually Kate Gosselin who is causing the most trouble.

“Everyone had heard the stories of Shannen’s behavior on sets when she was younger,” says [a source close to the show]. “But she’s been one of the easiest people to work with. She’s practically the opposite of Kate.”

The worst of Kate’s diva antics is her extreme tardiness.

“Kate shows up late for hair and makeup every time,” a show insider says of the rehearsals that led to Monday night’s opener, which drew a record-breaking 22.8 million viewers.

A rep for the ABC program says, “Kate is always on time and is a pleasure to work with,” but the insider begged to differ.

“The staff has warned her and lectured her about being late, but Kate just gets angry and blows them off,” says the source. “No one wants to deal with her.”

Hmmm, I think I’m going to go with the insider source on this one. I believed the rep for ABC until they said Kate Gosselin is a pleasure to work with. There’s just no way that can be true; I mean, have you seen Jon & Kate Plus 8? 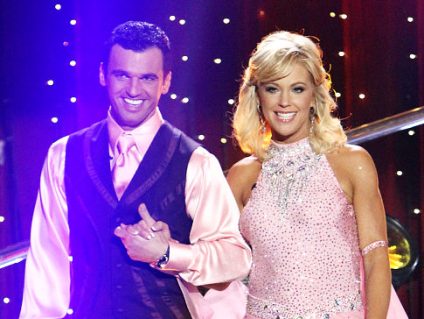