I seriously thought it was a gag headline when I read that PETA bailed Nadya Suleman out and saved her from losing her home.

PETA is paying Nadya Suleman a lump sum $5,000 plus a month’s supply of veggie burgers and veggie dogs for her whole family – in exchange the Octomom has agreed to put a sign in her yard.

Hey PETA! If you’re paying people five grand to have an ad on their lawn, sign me up!!

A spokesperson for the animal right organization told Nadya Suleman, “Taking us up on our offer is a win-win situation: it would help you and your children to keep your home and also reduce the number of homeless dogs and cats.”

How clever of PETA to use a woman who herself should be sterilized, in the fight against the over population of domesticated animals.

The awesome sign that will now appear in Nadya Suleman’s front yard reads: 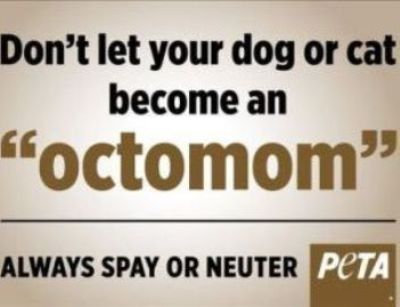 People for the Ethical Treatment of Animals (PETA), with more than 2 million members and supporters, is the largest animal rights organization in the world.

PETA focuses its attention on the four areas in which the largest numbers of animals suffer the most intensely for the longest periods of time: on factory farms, in laboratories, in the clothing trade, and in the entertainment industry. We also work on a variety of other issues, including the cruel killing of beavers, birds and other “pests,” and the abuse of backyard dogs.