Ugh! Do we really need another story about a man cheating on a woman?

Kim Kardashian and Reggie Bush broke up last weekend, and everyone has pretty much been mum on the subject ever since.

Until now, that is.

Turns out the couple’s split may not have had as much to do with Kim’s busy schedule as it did with Reggie’s wandering wiener and pictures of a blonde waitress named January Gessert leaving Bush’s house at 7:00 in the morning after allegedly spending the night.

This isn’t the first time Reggie Bush has been accused of cheating on Kim Kardashian, but it is the first time there’s been possible photographic proof. In the past there were rumors that Reggie hooked up with a chick in Las Vegas named Crystal, a woman named Danielle from New Orleans, and a model from Miami named Carmen Ortega.

When January was asked about Reggie, January claimed she didn’t know him. But then became flustered and contradicted herself – saying that she went to his house, but he wasn’t there, before adding, “I know him from TV .”

Reggie has reportedly set up an elaborate system to hide his cheating from Kim – including the use of multiple cell phones.

I am so disgusted by men right now; my boyfriend’s lucky he doesn’t live with me.

The mistress in question, January Gessert….. 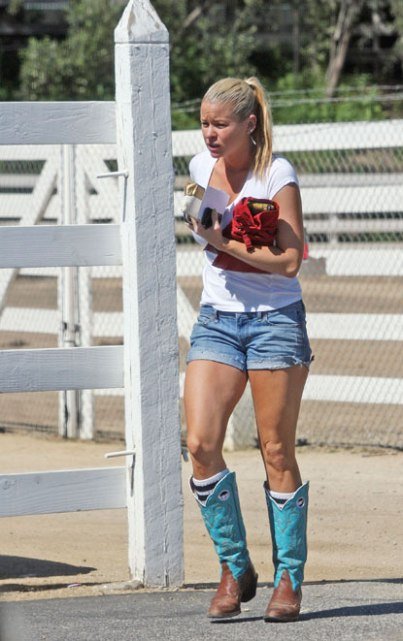