I don’t understand the fascination with Robert Pattinson; although I suppose if I were in a tween and a fan of vampires I would. I remember being that age and totally insane head-over-heals for male celebrities – but I lusted after movie stars like Tom Cruise. You know, actors who didn’t look like the totally stank and could actually spar with a stuntman.

Robert Pattinson, 23, is the first one to admit he’s not very strong.

“I punched the stuntman’s face four times — as hard as I could,” Rob recalled.

“And he just grinned at me and said he didn’t feel a thing. It was frustrating.

“When I was a teenager I often got myself into precarious situations without realizing that it would end in a brawl, more than once!”

Is he wearing clear braces?? 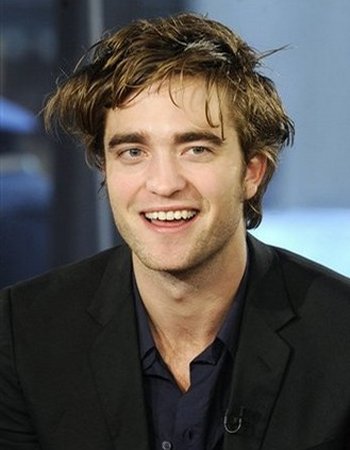 Robert Pattinson was born on May 13, 1986, in London, England. He enjoys music and is an excellent musician, playing both the guitar and piano.

When Robert was 15, he started acting in amateur plays with the Barnes Theatre Company. Afterward, he took screen role like Ring of the Nibelungs (2004) (TV) (Kingdom of Twilight) as Giselher.

In 2003, Robert took on the role of Cedric Diggory in Harry Potter and the Goblet of Fire (2005). He got his role a week later after meeting Mike Newell in late 2003.

He has since been cast as Edward Cullen in the highly-anticipated film, Twilight (2008/I). His music will also be heard in the film. Additionally, Robert has completed upcoming roles as Salvador Dalí in Little Ashes (2008) and Art in How to Be (2008).