This is kinda kooky – it seems pop icon Madonna and funny lady Ellen DeGeneres are related. No, really!

Genealogy researchers for Ancestry.com discovered Madonna and Ellen DeGengeres are 11th cousins – sharing a common 10th great-grandfather, a Frenchman by the name of Martin Aucoin.

Last year Ancestry.com found a connection between Harry Potter actress Emma Watson and a woman accused of witchcraft; currently the site is assisting NBC with their new genealogy show – on which celebrities learn about their ancestors – Who Do You Think You Are?*

Madonna On Ellen DeGeneres in 2006:

In other “no, really” news, Heidi and Spencer Pratt have changed their names. Yup. Not only that, they’ve given themselves “true native-American names”. Seriously.

In an effort to become more spiritual, Heidi Montag will now be known as White Wolf and husband Spencer Pratt is Running Bear.

I am honestly left speechless.Those are really stupid names, they could have at least come up with something a little more creative – like, Plastic Gnat and Fuzzy Devil or something. 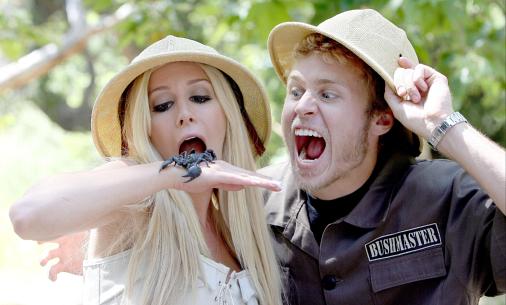 *Who Do You Think You Are?
Each episode will take viewers on an emotional, personal – and often mysterious – quest following one of America’s best-known celebrities into his or her past, sharing the celebrity’s surprise as they uncover stories of heroism and tragedy, love and betrayal, secrets and intrigue that lie at the heart of their family history. [source]