It’s sure starting to look that way. I can see how they would be attracted to each other – Benji clearly loves blondes having previously dated Sophie Monk and Paris Hilton, and Holly likes tattoos, as evidenced by her time with Criss Angel.

Holly Madison and Benji Madden (why must they have similar sounding last names?) were in Las Vegas over the weekend for Benji’s celebrity boxing match which he totally won.

Marc Malkin reports on the couple’s Vegas weekend together:

The E! reality star and the tattooed rocker were first spotted Friday night around midnight with Benji’s brother Joel at the Palms Casino Resort, stopping into N9NE Steakhouse to say hello to executive chef Barry S. Dakake. The three then headed over to the Playboy Club to meet up with Canadian pro skateboarder Pierre-Luc Gagnon.

Earlier in the day, Madison tweeted about Madden, who was prepping for his Saturday-night fight against rocker and radio show host Riki Rachtman. While Madison didn’t refer to the Good Charlotte rocker by name, she posted, “Whoever’s at World’s Sexiest Boxer’s weigh in better take a pic of him in his underwear for me.”

On Saturday afternoon, Madden and Madison enjoyed some time in the sun at Palms Pool and Bungalows with a group of the reality starlet’s gal-pals.

Madison really showed her love support for Madden at his Ellis Mania fight against Rachtman at the Joint at the Hard Rock Hotel and Casino. She and some girlfriends wore T-shirts emblazoned on the front with “Team Benji” and on the back, “Show Me Your Butt.” Shortly after Madden won the brawl, Madison tweeted, “World’s Sexiest Boxer Prevails.” They celebrated the win at nightclub Wasted Space.

And if that wasn’t enough of Madison gushing over Madden for you, she also posted a photo on Friday of a pass for an upcoming Madden DJ gig at the Palms. She tweeted, “Found some hotness in the bathroom.”

No word if she ever got that photo of Mr. Hotness in his underwear. 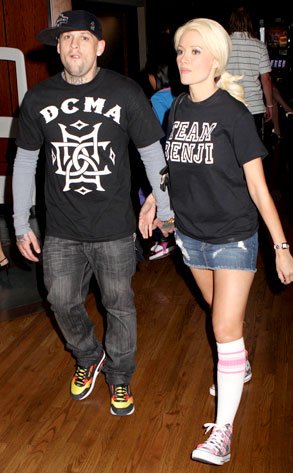