I got the heads up on this one from one of my Twitter buddies, inkyhack, earlier today.

Comedienne and The View co-host Whoopi Goldberg has come to the defense of alleged cheater Jesse James, saying she understands why he would cheat because she “screwed around” during all three of her marriages.

Whoopi also thinks we should all get off Jesse’s back and stop judging him until we’ve heard the full story from Jesse himself.

She confesses, “I did it (cheated) five or six times… Yes, I screwed around while I was married, yeah. I made mistakes too. It happens sometimes.

“Maybe he was trying to find something different too. I’m not excusing what I’m doing as, ‘Hey, maybe there’s something else to look at here’ as opposed to just saying, ‘Hey, he’s a bonehead.’ Maybe he just wanted something wonderful in his life (married a star) and couldn’t deal with it. It’s just a possibility, I know it’s crazy.”

Goldberg split from first husband Alvin Martin in 1979 after five years of marriage and went on to marry David Claessen in 1986. That relationship lasted two years and she later wed Lyle Trachtenberg in 1994, before the pair divorced just a year later.

Whatever Whoopi…..he’s still a bonehead in my book. 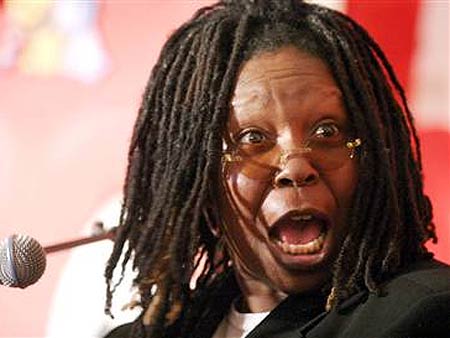