Maybe this is why I haven’t felt well the last couple of days. Maybe I knew there was bad news on the horizon.

It was announced and confirmed by both parties on Twitter today that funny couple Jim Carrey and Jenny McCarthy have ended their 5-year relationship.

Jim said:
Jenny and I have just ended our 5yr relationship. I’m grateful 4 the many blessings we’ve shared and I wish her the very best! S’okay!?

Then Jenny wrote:
Im so grateful for the years Jim and I had together. I will stay committed to Jane and will always keep Jim as a leading man in my heart

One of the problems with the world of entertainment reporting these days is the ability to really separate what’s real and what’s not. This turn of events, I’m sad to say, is most likely real. Sure, both Jim and Jenny enjoy a good joke, but I don’t think that’s what this is. *tear*

Jim Carrey and Jenny McCarthy stared dating at the end of 2005 but did not officially go public with their relationship until June 2006. In April of 2008, Jenny announced on The Ellen DeGeneres Show that she and Jim had just moved in together, but had no plans to marry. As a couple, Jenny McCarthy and Jim Carrey are prominent activists and spokespeople for the autism awareness and education foundation, Generation Rescue. Both Jim and Jenny believe autism and related disorders are caused by childhood vaccinations.

They seemed like such a relaxed happy couple; I wonder what went wrong. Jim Carrey just became a grandfather – maybe that was too much for the not-yet-40 year old Jenny McCarthy to handle. I don’t know though, she doesn’t seem like the type to be bothered by such a thing. 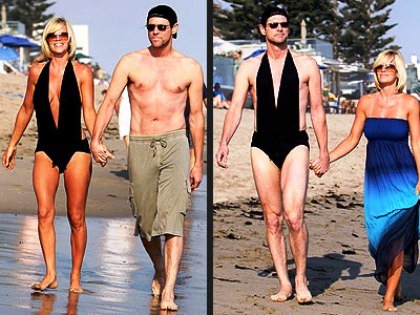