How much you want to bet the next move Heather Locklear makes will be checking into rehab? I mean, that’s how it works these days, right?

We’re finding out today that actress Heather Locklear was arrested last Saturday on suspicion of hit-and-run.

Around 4:00 a.m. on Saturday someone living near the North Ranch Country Club in Westlake Village, CA heard a crash, but didn’t report it to the Ventura County Sheriff’s Department until after 7:30 p.m. that night.

When deputies went to the area to investigate, they discovered a ‘No Parking’ sign had been knocked over, and there were obvious signs that a car jumped the curb and hit the sign.

After some good old fashion police work, it was confirmed that the car in question was a black BMW registered to Heather Locklear. They went to her house and found that there was damage to the BMW on the property which was consistent with the crash.

Because the offense is a misdemeanor, Heather Locklear was not physically taken into custody; she was simply cited and released. According to the Ventura County Sheriff’s Dept, a hit-and-run citation is considered an “arrest.”

This is not the first time Heather Locklear and her car have gotten into trouble.

In 2008 the blonde beauty was busted in Santa Barbara on charges of driving under the influence of prescription meds. She ultimately pleaded no contest to a misdemeanor charge of reckless driving in that case, and was given three years informal probation.

This latest incident has caught the attention of the Santa Barbara prosecutor’s office, and they are looking into it as a possible violation of Locklear’s probation. 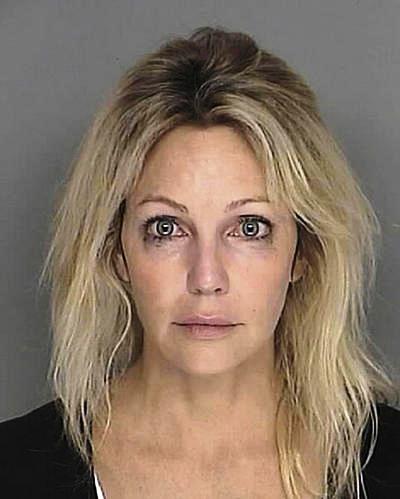