I never thought this day would come. Honestly, I didn’t. I just figured the world would always have Law & Order. Always.

But I was wrong.

Deadline Hollywood is reporting that Law & Order is not being renewed for what would have been a record-breaking 21st season. So far NBC is declining to comment if the show has been canceled for next season. “It’s a fluid situation,” says a source close to the talks. “It’s not a done deal. It’s possible this is just a negotiations tactic.” A deal was in place if NBC picked up the Law & Order flagship, and insiders say the show creator Dick Wolf is furious, now accusing the network of “reneging” on that deal. If true, it means Dick Wolf will have to settle for simply tying Gunsmoke‘s record as TV’s longest-running drama series. L&O’s renewal by NBC was also contingent on securing a sizable commitment from the series’ cable home TNT whose off-network deal for the show was up at the end of this season. Wolf now wants to try to make a deal to take the Law & Order flagship to TNT himself according to Deadline [Hollywood]. Whatever happens with the original L&O, the new spinoff Law & Order: Los Angeles, is still a go and this should not impact the expected renewal of Law & Order: SUV.

No! No! Please don’t go!! I don’t know how long I can survive without the doink-doink. 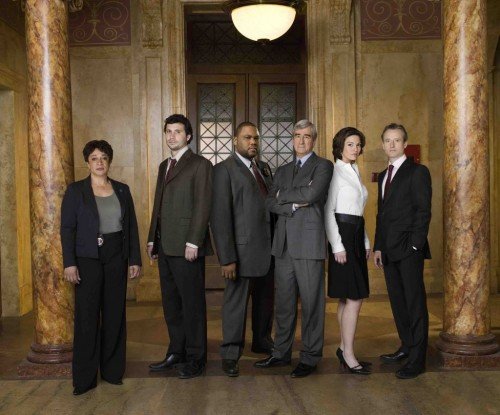