Excuse me Mr. Grim Reaper, but do you think you could take a vacation from the celebrities for a little bit? I mean really, what is up with all this death??

Musician Paul Gray’s dead body was discovered Monday morning in his room by an employee of the Town Plaza Hotel in Urbandale, suburb of Des Moines, Iowa. The bassist for the band Slipknot was 38-years-old.

Although no evidence of foul play was found at the scene, the Urbandale Police Dept says there will be an investigation into Paul Gray’s death, and an autopsy is planned for Tuesday.

Des Moines rock radio station Lazer 103.3’s music director, Andy Hall, described his friend of ten years as a talented bass player, and was one of the most caring and friendliest people he’s known.

“This is a big blow, not only to the community of Des Moines but fans of metal at large, worldwide,” Hall said. “It’s a devastating loss. Paul was a wonderful human being.” [source] 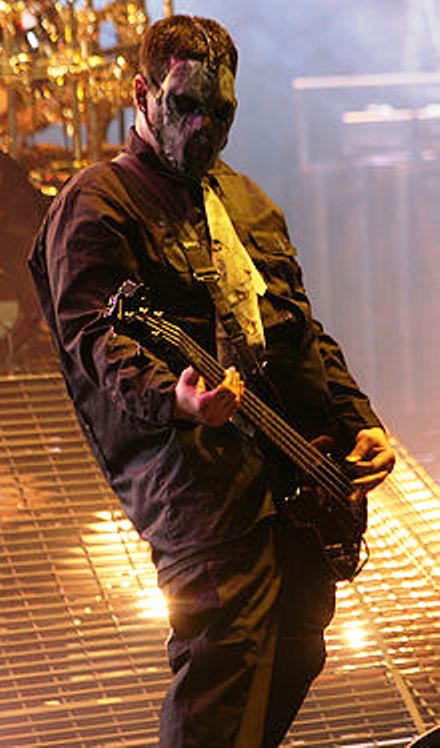 …In June 2003, Gray crashed his car into another vehicle. After police were called to the scene and searched his car, Gray was arrested for possession of cocaine, marijuana, drug paraphernalia, and failure to obey a traffic signal. He was sentenced to one year of informal probation.

…Gray commonly used a pick on later releases, but he can be heard using the slapping technique in the songs “Do Nothing/Bitchslap” and “Confessions”, on Slipknot’s demo Mate. Feed. Kill. Repeat. He also had a fingerstyle technique, as seen in the DVD of The Making of All Hope Is Gone.